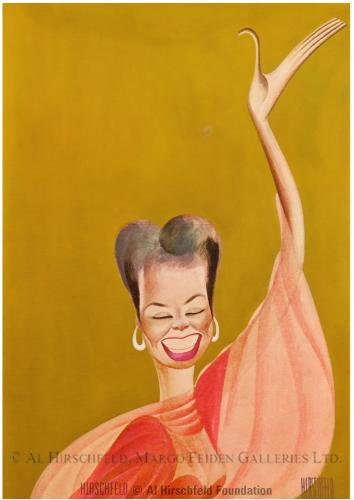 So much of American popular culture is the work of Black artists. One of the original art forms that America can take credit for is jazz, which was created by Black musicians. Rock and roll began with White performers re-recording songs by Black performers. Even the acclaimed musical comedy, another American original, draws as much from Black performers and minstrel shows, as it does from European operettas. As the 20th Century unfolded, Hirschfeld's drawings captured a great deal of the impact Black artists had on the performing arts in America.

Although the holidays are now over, we still have a present for you: an evening of films "Drawn by Hirschfeld" on Turner Classic Movies hosted by Leonard Maltin and Dave Karger. This Wednesday, January 5th, starting at 8 pm (ET).

END_OF_DOCUMENT_TOKEN_TO_BE_REPLACED
Store: Check out the "The Al Hirschfeld Century" »