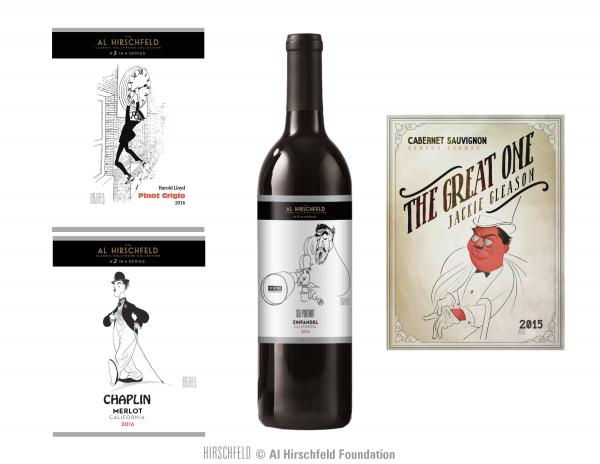 Just over 90 years since his first theatrical drawing was published, and nearly 100 years since he published his first work, Al Hirschfeld remains in the public’s eye and is quite busy. As a new year begins, we wanted to take a moment and recap some of the highlights of the last year for the Al Hirschfeld Foundation.

Hirschfeld artwork is being seen by an ever-increasing audience. This summer we were invited to put together a pop-up gallery for eight weeks in Manchester, Vermont as part of an arts initiative to revitalize the town, which has been hard hit by the retail decline. We opened a full-service gallery with limited edition prints, a selection of drawings, books, posters, and t-shirts, that thousands of people enjoyed, including schools and seniors, who each brought groups to the gallery.

In December, we did a series of pop up galleries in and around Los Angeles over a two-week period. We brought 100 original drawings, including a classic Charlie Chaplin drawing that sold on the first day for $50,000. Proceeds from all our “pop ups” are earmarked for AHF education programs and sustaining our mission to support performing and visual art organizations.

In addition to these unique gallery events, we also saw Hirschfeld artwork included in several museum exhibitions including a fascinating show at the Nassau County Museum entitled “Fool the Eye” on optical illusions and other artist sleight of hand. You can see three Hirschfelds there, along with works by Salvador Dali, Jasper Johns, and Roy Lichtenstein, now through March 4th.

Through March 24th, you can see six Hirschfelds in the monumental “Leonard Bernstein at 100” a career spanning retrospective celebrating the conductor/composer’s centennial now on at the New York Public Library of the Performing Arts at Lincoln Center. It then travels to Los Angeles, where it will be on view at the Skirball Center from April 26 through September 2nd. (Before you leave Lincoln Center though, you may want to stop by Hirschfeld’s barber chair and drawing table and see what full size reproduction is being featured there.

We also presented our annual installation at the Algonquin Hotel In New York, although this time we took over the lobby in summer, rather than for the holidays. This year’s theme was “The Tonys As Seen by Hirschfeld” which included more than 30 images of Tony-winning plays, musicals, and performers.

We debuted “The Hirschfeld Century” podcast this summer. Over 12 episodes so far we have explored various aspects of Hirscheld’s art and have been able to give backstories to some of his most well known work, as well as share pieces audiences were not aware of. Look for our new episodes to feature a new theme song written by the legendary Dick Hyman, “Three or More NINAs.”

Finally after a 16-month federal copyright and contract lawsuit, the Al Hirschfeld Foundation now has complete control of nine decades of Hirschfeld’s artwork and licensing rights. If you want to license any Hirschfeld art for your project big or small, you now only have to contact the Foundation. Our staff prides itself on its helpfulness and quick turnaround. We have already arranged for a series of books, magazines, and new music releases to feature Hirschfeld artwork, as well as two episodes of “Curb Your Enthusiasm”. Working with the TCM Wine Club, wine with labels featuring Chaplin, Harold Lloyd, Jackie Gleason and more than ten others will soon be available.

We are no longer affiliated with any gallery in New York or New Jersey, so look forward to new venues to see Hirschfeld artwork there and around the country. We continue to work with longtime Hirschfeld friends and print publisher at George J. Goodstadt in Connecticut, as well as the Chris Beetles Gallery in London, and Stuart Ng Books in California.

We have also been hard at work to bring the remarkable Hirschfeld curriculum developed by the New York City Board of Education to a wider audience. We will be talking more about this as the year continues, but if you know a school district, school, or class that would be interested in this K through 12 education material based around Hirschfeld’s life and art, please contact us at info@AlHirschfeldFoundation.org,