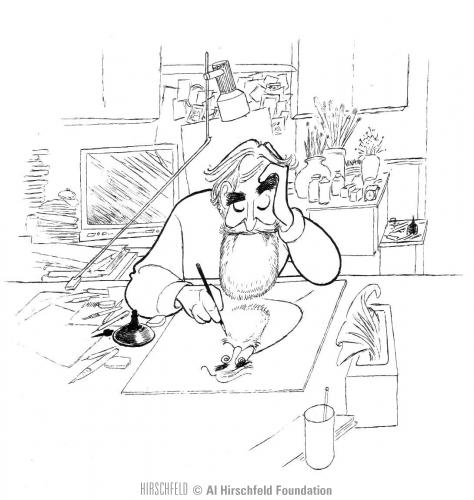 Well, old buddy, you've been slipping away from us, these ten years, bit by bit, piece by piece, item by item. A little smidgeon of Al here, a sprinkling of Al there -- from Natchez to Mobile, from Memphis to St. Joe, wherever the four winds blow.

Couple of years ago there was an auction of what was physically, tangibly left of you. Not the drawings, the paintings, the life's work, but the furniture and so forth. It was held on East 87th Street. I couldn't bear to go.

The best thing The New York Times ever did was print a caricature brought to them under the arm of a hungry young man from St. Louis named Al Hirschfeld in 1928

The next best thing was when The Times started running a half-page caricature or set of caricatures by master artist Al Hirschfeld each and every Sunday in the year, plus other times betwixt times. It set the tone for the whole of New York theater and the arts generally, that week and every week.. It encapsulated. It raised the curtain. To be "Hirschfelded" was to be immortalized, sort of. And the fact that Al Hirschfeld was a lifelong very quiet radical was behind all those lines too.

Al Hirschfeld, caricaturist and artist to rank with Daumier, Nast, David Low, or who you will, wasn't really my buddy, he was just a friend, a hero, and the most unpretentious famous man I ever knew or wrote about -- a beloved friend to me and my wife Frances and everybody else up to the night he died, January 20, 2003, a bare five months short of his100th birthday. His wife Dolly had predeceased him. His wife Louise carries on the memory.

When men and women a hundred years from now, two hundred years from now, want to know how actors, actresses, directors, choreographers, singers, dancers, musicians, clowns, playwrights, et al of our own times looked, moved, thought, sounded, Al Hirschfeld's brilliantly penetrating less-is-more line drawings -- all in line! -- will be there as a roadmap.

Unpretentious -- Funny thing to say about a man who was flagged around the world by his great white Santa Claus beard, and who until almost the end drove himself to Broadway openings -- third row, on the aisle -- in a great navy-blue high-topped Cadillac.

The beautiful old town house on East 95th Street where he had lived for 54 years was landmarked five seasons ago. It’s the innards of that house that went under the auctioneer's hammer -- tables, chairs, cabinets, implements, photographs, graphics, busts, African masks and drums, Javanese hand puppets, an easel, a drawing board, Al's pioneering paintings of life in 1930s Harlem, a pair of pearl-handled opera glasses, his self-devised flashlight pen for quick notations during shows -- even the huge stuffed armchair that was, I believe, his favorite -- all this and much more went to the highest bidders.

I know, I know -- it wasn't my headache, and life must go on for the living. But couldn’t some museum or library have made a permanent home -- a Hirschfeld Room -- built around that drawing board at which Al sketched and drew and filled in and shaded and erased, erased, erased, erased, forever erased…...

(The Lincoln Center Library of the Performing Arts already has his barber's chair and drawing table with rotating exhibitions of his artwork on it. Maybe they figured that was enough. It isn’t)

Al still lives on in a DVD ("The Line King") that amazed him as much as it amazes me. He lives on wherever his drawings and paintings can be seen, most accessibly within the pages of many books along with thousands of images on this website. But for the tangible, solid, human evidence within that house on 95th Street -- it is now, for all time, wherever the four winds blow.

Award-winning writer and critic Jerry Tallmer was Associate Editor and one of the founders of The Village Voice. He was a reporter, feature writer, & critic for the New York Post for nearly 30 years. Since 1990, he has been a regular contributor to The Villager. He is a lifelong resident of Manhattan.