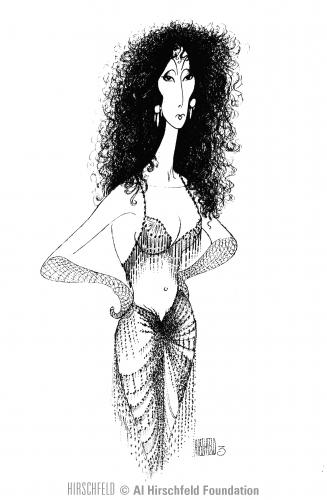 For an artist who has been gone for fifteen years, Al Hirschfeld remains pretty busy. Ninety-two years after his first theater drawing, Hirschfeld is back on Broadway at The Cher Show, where audience members can take home a t-shirt featuring’s Al’s 1988 drawing of Cher in a signature Bob Mackie design or a limited edition print of Cher at three different stages in her career (the same as portrayed by the three remarkable actresses in the show). To quote another musical associated with Hirschfeld, “It’s so nice to have you back where you belong.”

The Cher Show at The Neil Simon Theater is not the only place to see Hirschfeld in New York right now. His work is featured in two other venues that he spent considerable time at over his career. For the 75thanniversary of City Center, America’s first true performing arts center, a gallery of Hirschfeld drawings and prints of it’s legendary productions are on view at City Center through June 2019, and at the Performing Arts Library at Lincoln Center, where a new exhibition on City Center also includes a second gallery of drawings and prints that cover theater, music and dance that runs through March 2, 2019.

There are also four Hirschfeld drawings that feature animals in an interesting new exhibition at the Nassau County Museum of Art. “Wild Kingdom: 100 Years of Animal Art”, which runs until March 3, 2019.

Earlier in the year, another exhibition at the New York Public Library for the Performing Arts at Lincoln Center on Leonard Bernstein’s centennial featured six Hirschfeld prints of the conductor and his work. The next stop for show, which has been traveling the country, is the Woody Guthrie Center in Tulsa, Oklahoma, January 24 to April 29, 2019

There was also our annual installation this summer at the Algonquin. “Today's Broadway as Seen by Hirschfeld” featured 21 large-scale reproductions of Hirschfeld drawings of shows, performers, playwrights, lyricists and composers that you can see on Broadway today. Everything from My Fair Ladyto Springsteen on Broadwaywas included, and we scored another hit in this theater district landmark.