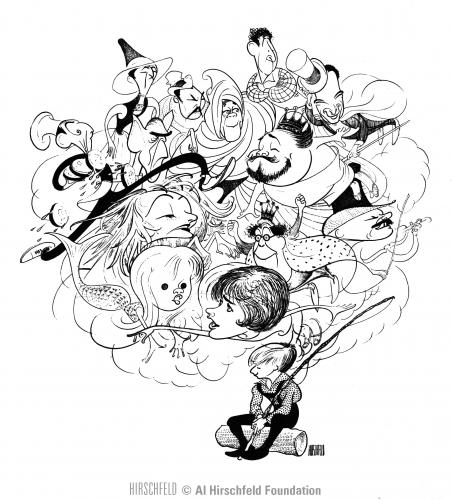 "Join young Hans Christian Andersen as he daydreams his way to adventure through his most famous fairytales," reads the tagline for this 1966 film by Arthur Rankin, Jr. and Jules Bass, the creators of Animagic, and best known for their television specials, Frosty The Snowman, Rudolph The Red-Nosed Reindeer and The Wacky World Of Mother Goose. For the poster art and soundtrack album cover of The Daydreamer, the producers turned to Hirschfeld to capture the diverse group of performers who supplied voices in the film including Patty Duke as Thumbelina, Ray Bolger as The Pieman, Boris Karloff as a sinister rat, Margaret Hamilton as the mean Mrs. Klopplebobbler, as well as Hayley Mills, Tallulah Bankhead, Burl Ives, Victor Borge, Terry-Thomas and Ed Wynn. Hirschfeld drew more than 25 potraits altogether for drawings of the stars both in and out of costume.