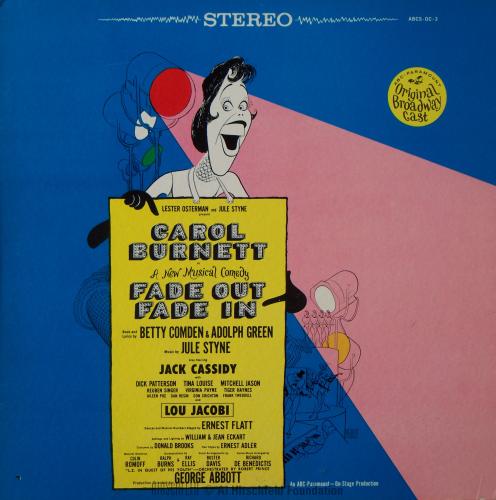 "Chorus girl Hope Springfield, full of hope but not much talent, accidentally is given the starring role in a new movie. When the error is discovered, heads roll and the completed film is shelved. But Rudolf, the nephew of studio head Lionel Z. Governor, takes a liking to the girl and arranges for a sneak preview. The movie is a success, Hope (rechristened Lila Tremaine) becomes a star, and in true Hollywood happily-ever-after fashion she and Rudolf walk off into the sunset hand-in-hand."

Carol Burnett, in her return to Braodway four years after her debut in Once Upon A Matress, played Hope Springfeld in this 1964 Betty Comden-Adolph Green-Jule Styne musical. Hirschfeld's art advertised the show on poster and print ads, so it was natural to use it on the cast album. This was his second of 11 drawings of Burnett, with works from her television and film career and again in Broadway when she returned thirty years later. While he later admitted Burnett's cosmetic surgery robbed her of some of the great personality on her face, he continued to enjoy drawing her and watching her.