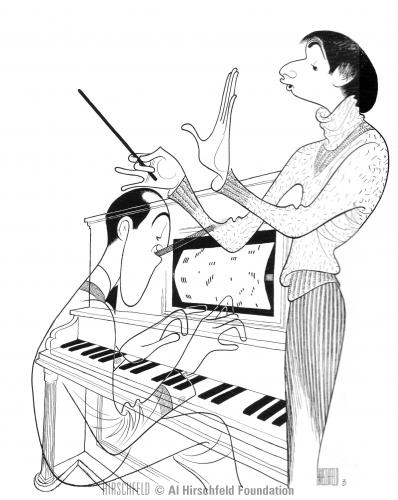 This week features a cover with multiple connections to Hirscfheld. The first is George Gershwin who was an old friend of the artist. Hirschfeld had known the Gershwins from early in their careers and stayed friends with Ira until until his death. Al also knew Michael Tilson Thomas since he was a child. He always thought of him as a Thomashefsky, the unassimilated name of his grandparents who were stars of the Yiddish Theatre.

Recorded in 1975, this album uses the then newly discovered 1925 piano roll cut by George Gershwin himself of perhaps his most famous composition, "Rhapsody in Blue". Tilson Thomas leads an orchestra to accompany Gershwin's playing to great effect. The album was nominated for a Grammy as the Best Orchestral Performance of the Year.