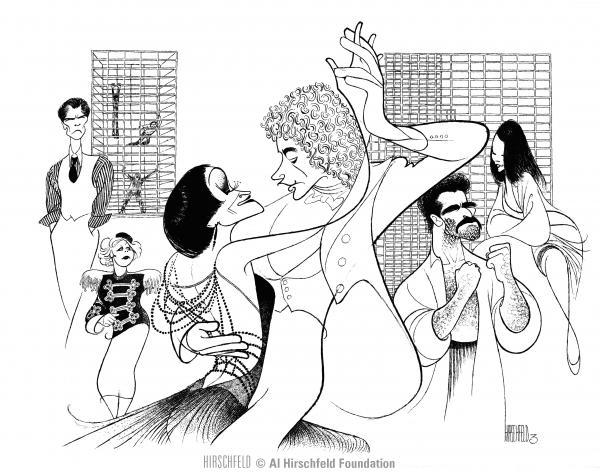 "kiss of the spider woman"

Actor, singer, and playwright Anthony Crivello gave an exit interview to the Huffington Post after spending six years in Hal Prince's Las Vegas production of Phantom, and while talking about his career and the honors he has earned, the Tony winner mentioned one of the most rewarding aspects of his career.  "Working with Chita Rivera and Brent Carver, Crivello won the 1983 Tony Award as Best Featured Actor in a Musical. He was granted another honor -- the third such honor for him -- when fabled "Line King" Al Hirschfeld drew the cast for the Sunday New York Times.

"Hirschfeld had drawn Crivello before. The actor explains that when he heard about the first drawing, "I did research on Mr. Hirschfeld and realized the magnitude of his work and then I saw his 'vision' of me in the role of Che. I was honored, humbled...and flabbergasted. He captured a combination of things that were true to my portrayal of Che in black and white. His use of negative and blank space still has such energy. He was just a master of his craft.

"The three Hirschfelds I have (Che in Evita, the killer in the Broadway show The News, Valentin in Kiss of the Spider Woman) are a permanent record of my Broadway history, And, for that I will always be indebted to the great artist that he was. I am proud that Mr. Hirschfeld's work hangs in my home today." (In the Kiss of the Spider Woman drawing below, Crivello is second from the right.)

Crivello was also drawn in an unpublished drawing of Marie Christine.