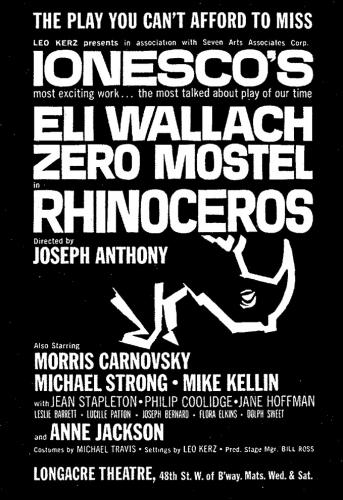 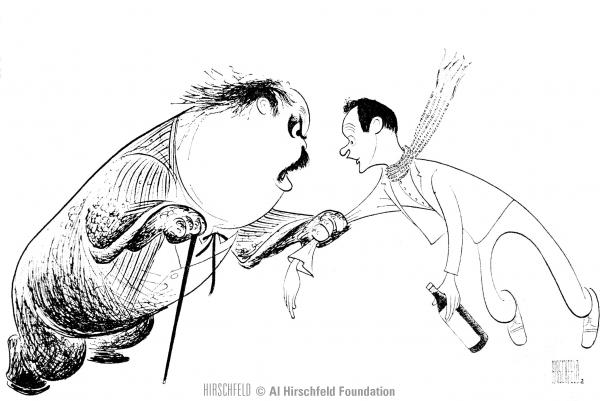 In the legendary production of Ionesco’s absurdist play, Rhinoceros, Eli Wallach looked like an eagle in flight on the stage of the Longacre Theatre in 1961.  He was an object tossed through the air as Zero Mostel transformed himself into a pachyderm and ravaged everything in his path.

The girl Eli adored, beautiful Anne Jackson, whose habit of standing on one leg with a wink and a smile melted Eli's character of Berenger on the spot.

It was during the run of the play, that I first got to see the extraordinary acting couple at work.  I was assistant to the producer/stage designer Leo Kerz, and I observed a special event: an anti-fascist play wrapped in an absurd comedy with great actors including Morris Carnovsky and Jean Stapleton.

I used to stand in the rear of the theatre with a drama classmate of mine, a young man named Dusty Hoffman who ran the concession stand at the time.

We knew that on the stage a cross section of America’s greatest actors were at work.  They represented The Group Theater, The Neighborhood Playhouse, The Actor’s Studio and the Zero Mostel school of acting.

This was the environment that Eli and Anne worked in and brought a brilliant mutual understanding of theatre to their professional and personal lives.

After Eli won a Tony award for his performance in Tennessee Williams’ The Rose Tattoo in 1951, he went on to become the finest American character actor. Visiting Mr. Green was a final performance on the stage.

Eli’s film debut in Elia Kazan’s Baby Doll began a very successful career in cinema.  His description of the making of The Misfits is unforgettable.  His incredible gifts as an observer and photographer of the cultural life of the last 60 years was collated into his autobiography, The Good, The Bad and Me.

I shall always treasure the wrist watch Eli gave me. He was a collector of clocks.  You see, he never let Time stand still.

Though Eli and Anne appeared in many plays together, their most important productions are however their gifted children. Artist Peter, actor/designer Katherine, and actor/teacher Roberta.

There was a public telephone backstage at the Longacre Theatre…before the play started I used to hear Anne speaking to the children ”Did you do your homework?”  I imagined the Wallachs kept tabs on the children from all the backstages along the Rialto!

The acting of Eli and Anne continued to mellow with age. Their vitality, humor and wisdom added to the grand couple’s identity in the American Theatre.

With admiration and fond memories.