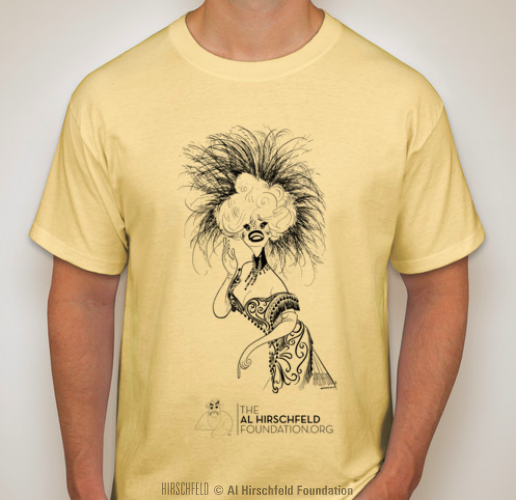 Last year we debuted our exclusive t-shirts of Peter Pan and What’s My Line. Today we are excited to offer 4 new styles of shirt! These four designs were made for BroadwayCon 2017. The event proved to be a great success, and the Al Hirschfeld Foundation, which contributed objects to BroadwayCon’s “museum, hosted a panel, “Drawn to the Theater: Whose Lines, Whose Colors, Who Draws Your Story?”, and manned a booth in the convention’s marketplace, was proud to be a part of this annual Broadway event.

Our Stephen Sondheim shirt was the best seller of the BroadwayCon weekend. This image is from a 1999 portrait of Sondheim which has never been available before. Hello, Dolly! now has it’s own t-shirt, just in time for the revival starring Bette Midler that just started previews on Broadway last week. The classic image of Guys and Dolls also has a t-shirt now. We also made a few tote bags featuring this image for BroadwayCon and they sold out almost immediately!

The final new image for our t-shirts is of William Shakespeare from the 1939 jazz musical Swingin’ the Dream, based on A Midsummer Night's Dream. Hirschfeld did the promotional art for the production that featured the Bard dancing to the strains of Benny Goodman and Louis Armstrong, who played Bottom in the show.. Unfortunately, the production only lasted 13 performances, but we’re keeping the musical alive with this t-shirt.

We have a very limited quantity of these shirts left in our store. We have varying sizes from Small to Extra-Large, and 5 colors: white, grey, lavender, yellow, and blue.

Head over to our online store to find your size and color today, before they’re gone forever!