Hirschfeld’s Advice to the Lovelorn 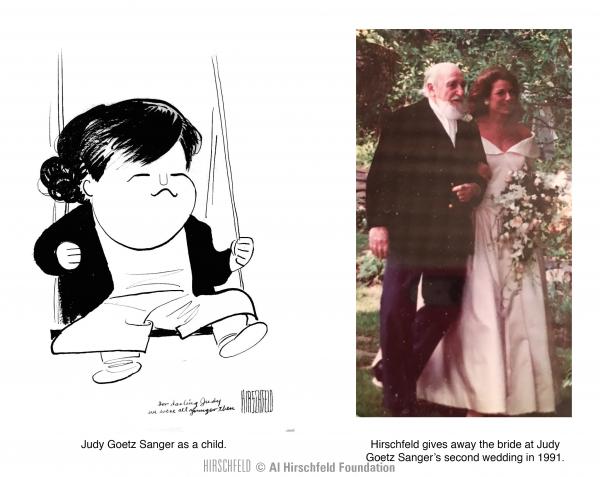 Ruth and Gus Goetz were successful playwrights and screenwriters, best known today for The Heiress. They were longtime close friends of the Hirschfelds. In this excerpt from Judy Goetz Sanger’s forthcoming memoir, Spirits of the Staircase, Sanger, the Goetz’s only child, tells a story of how Hirschfeld helped her through a “bad patch” in her first marriage.

…Each of the Hirschfelds had been married before, and they had led equally sophisticated lives, with other partners, lovers, and admirers. Dolly’s first husband, John Brahm, was a German film director who had escaped from Nazi Germany in 1934. He ended up having an extraordinary television career in the United States, directing more segments of more well-known series, than anyone I’ve ever heard of, especially the Alfred Hitchcock series, because his particular talent was for anything scary, weird, or macabre. This might have affected the length of their marriage. Whenever he was in town he stayed with the Hirschfelds, on the top floor of their house, and sometimes for quite long stretches. Al’s studio was also on the top floor, in the front of the house, and just down the hall was the guestroom decorated for ‘Brahmie’, with black and white flocked velvet wallpaper. Nina called him Uncle Brahmie, and had no idea that he had been married to her mother, until she heard someone else mention it at dinner…

So the morning after my arrival, while I was sniffling in her [mother’s] guestroom, Ruth got on the phone to the Hirschfelds, who were like family, and she asked Al to come over to ‘talk to Judy who seems to be in despair’. That was exactly what she said. Al arrived quickly, around eleven, dressed in one of his dark boiler suits, the kind of  ‘Onesie’ that Winston Churchill wore during the war. Al often wore them for travelling. I remember I was dressed in black, with red eyes, sitting in the corner of Ruth’s couch and holding a box of Kleenex.  She made more coffee for the three of us, and then left the room, insisting that I should feel free to confide in Al. She was certain that Al was about to be particularly wise and fatherly.

Al said,  “Well Sweetie, this is a helluva thing. I’m so sorry.”

“You know”, he said, “these things happen, and you just can’t tell how it’s gonna go…”

I said, “When we got married, I thought we…”

…He interrupted and said, “Well whatever you thought, might not pan out. Everybody’s set up differently. You see Covarrubias was with a girl out in Bali and he brought her back to New York. He was crazy about her. She was a nice girl, of course I had no idea what kind of a language it was that she spoke. She had a great body on her, and she slept a lot. Covarrubias was afraid to leave the apartment, you know, leave her on her own, because she couldn’t communicate with anyone. Since she’d curl up and take naps all the time, kind of like a lemur, he got this big cage installed in the corner of his studio. It was this gorgeous domed thing, brass, with a door. You know the kind of thing I mean…”

“Right”, he said, “but a giant parrot. And she had a little sofa thing in there – he’d go out – and she’d stay in her cage…It was pretty happy for quite a while.”

“And you know”, he said, “at one time, Dolly was very close with a dwarf in Hamburg.”

There was no point in my crying, because by then I was laughing, and I couldn’t manage both at the same time.

“Oh sure,” he said. “I never met him, but I gather he was an attractive sort of a guy -- short of course. And he lived back stage in the theatre where she was working at the time, in a large round lacquer box! Of course I don’t know exactly how that can work out. But she said he was talented, so, there they were.”

“Well Sweetie, you know Dolly, she’s a pushover for anybody needs anything…But all I can say about you is, you’ve got a lot of life ahead of you, and since you were crazy about this fella just a year or two ago, you could give it another try. Or if not - not. Listen, Artie Shaw, you met him at the house, he had eight wives. Great musician, he used to play down at the old Lexington Hotel.”

I said, “Are you going to tell Mamma, that this is your advice?”

“Listen”, he said, “Ruthie has a jaundiced view of this kind of thing. What she and Gus had was a one-off.”

Not on the strength of Al’s advice, I returned home to London about a week later, and remained married for two more decades.

Judy Sanger’s other works include a book of poetry, Love In Our Language and a play, Close Harmony.