Hirschfeld and the Algonquin Continues 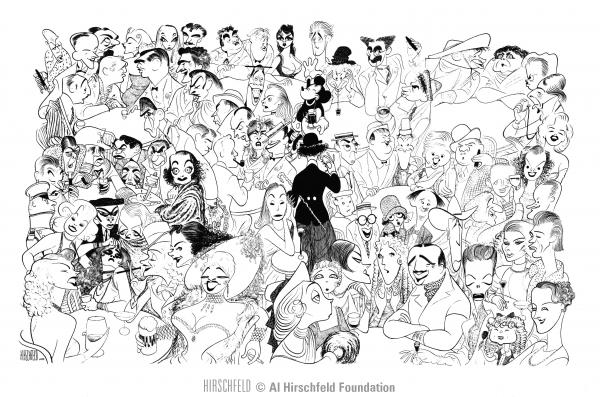 If you missed the five-month long celebration of The Hirschfeld Century at the famed Algonquin Hotel you missed something special. To spend time in that historic lobby surrounded by Hirschfeld art from his nine-decade career was something truly unique. Guests of course loved it, and there was a steady stream of off the street traffic as well to take it all in. It was something to see the place where the historic Round Table was, and above it, Hirschfeld’s classic portrait of the Algonquin wits.

Like all good things, it had to come to an end, but the good news is that there are still Hirschfelds to see in the hotel’s lobby. There you can see two Hirschfeld’s etchings: “Washington Gala,” a group portrait of all the performers who played a role in Lyndon B. Johnson’s inaugural, and a work that has a remarkable story to go with it.

“The Movies, 1954,” a fascinating history of the movies up until that time. Hirschfeld gathered groups of performers such as villains, clowns, leading men and ladies at different tables in an iconic work for a mural at the Fifth Avenue Cinema. The original drawing was later acquired by the Whitney Museum of American Art in 1960, and was published as limited edition etching in 1984.

Stop by the Algonquin to see these delightful works while they are on view, have a drink or a meal, and you may also want to say hello to Matilda the hotel’s cat, and now perhaps their most famous guest.