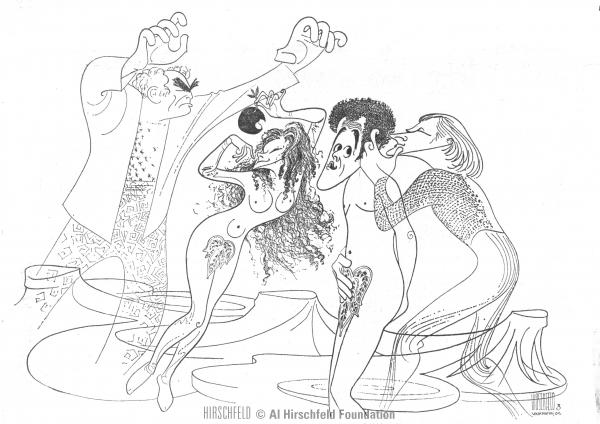 "creation of the world"

Al Hirschfeld received a number of honorary university degrees during his career, but this is the first time an entire exhibition has been devoted to a school and its alumni. “Al Hirschfeld and Syracuse: A Most Talented Association” opened at the Lubin House’s Palitz Gallery on February 27. The intimate show features drawings, prints and reproductions by Hirschfeld of notable Syracuse alumni in theatre, film, television, music and literary figures.

Organized in conjunction with the Al Hirschfeld Foundation, Syracuse University has taken the opportunity to highlight their remarkable alumni in the performing arts and beyond in this new show.  Alumni range from the legendary Dick Clark, whose 1985 portrait was flown in for this special display, to Vanessa Williams, (class of ’08), who can be seen in Hirschfeld cast drawing of the 2002 of Into the Woods. Aaron Sorkin, the man responsible for A Few Good Men and The West Wing is seen in a rare lithograph of the cast and creative team of the award-winning White House drama. Suzanne Pleshette, who studied at Syracuse for only one semester, is featured in a print from The Bob Newhart Show, and Taye Diggs, (class of ‘93) is featured in a print form the original production of Rent.

While alumni have only one drawing in the show, it does not necessarily mean that Hirschfeld drew them only one time. Bob Dishy, seen in the cast drawing of Arthur Miller’s The Creation of the World and Other Business from 1972 (seen above), has three other drawings to his name. Peter Falk, seen in the show in iconic works Columbo and The Prisoner of Second Avenue was drawn a total of seven times over two decades.

This unique show will only be on for a short time, so don’t miss it!