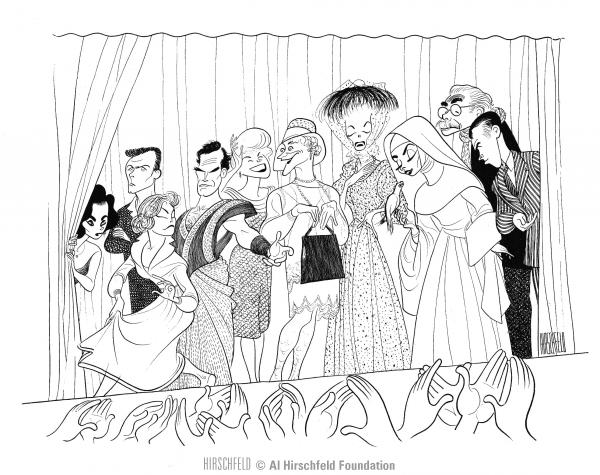 The name Al Hirschfeld has virtually been synonymous with Broadway since his first theatrical drawing was published in December 1926. But by then he was a six-year veteran of movie studio publicity and art departments, where he worked for Goldwyn, Universal, Pathe, Selznick, Fox, First National and Warner Bros. The best place to see many of the films he drew is on Turner Classic Movies, where on any given day, Hirschfeld supplied publicity drawings or poster artwork to a third of a half of the movies shown.

Now TCM, in partnership with the Al Hirschfeld Foundation, has debuted four new limited prints for the channel's "31 Days of Oscar" series. Each print highlights many of the contenders in the annual award season.

Best Actor and Actress Hopefuls, 1960 captures some of the greatest film stars of the 20th century vying for an Hollywood’s highest award. Elizabeth Taylor & Katharine Hepburn in Suddenly Last Summer, Jack Lemmon in Some Like It Hot, Jimmy Stewart in Anatomy of a Murder, Audrey Hepburn in The Nun’s Story, Charlton Heston in Ben Hur, Doris Day in Pillow Talk, Simone Signoret & Laurence Harvey in Room at the Top, and Paul Muni in The Last Angry Man. This work was published in magazines and newspapers around the world at the time.

Best Actor and Actress Contenders, 1961 imagines the contenders for Best Actor/Actress award in 1961 sitting down, in costume, together to await the results. In this limited edition print he includes Elizabeth Taylor in Butterfield 8, Sir Laurence Oliver in The Entertainer, Deborah Kerrin The Sundowners, Jack Lemmon and Shirley MacLaine in The Apartment, Burt Lancaster in Elmer Gantry, Spencer Tracy in Inherit the Wind, Melina Mercouri in Never on Sunday, Trevor Howard in Sons and Lovers, and Greer Garson in Sunrise at Campobello. This work was published in magazines and newspapers around the world at the time.

Best Actor and Actress Nominees, 2001 is a stunning composite of the nominees for Best Actor and Actress. Competing for the prize in this limited edition print are Russell Crowe in Gladiator, Ellen Burstyn in Requiem for a Dream, Ed Harris in Pollock, Geoffrey Rush in Quills, Julia Roberts in Erin Brockovich, Joan Allen in The Contender, Javier Bardem in Before Night Falls, Juliette Binoche in Chocolat, Tom Hanks in Cast Away, and Laura Linney in You Can Count on Me. This work appeared on the front page of The New York Times Arts and Leisure section the Sunday before the ceremony.

The Oscar: Angel or Devil? captures both the thrill of victory and the agony of defeat for film’s most coveted award.Biased as we are, these are a must for any movie lover's home.

Biased as we are, these are a must for any movie lover's home.