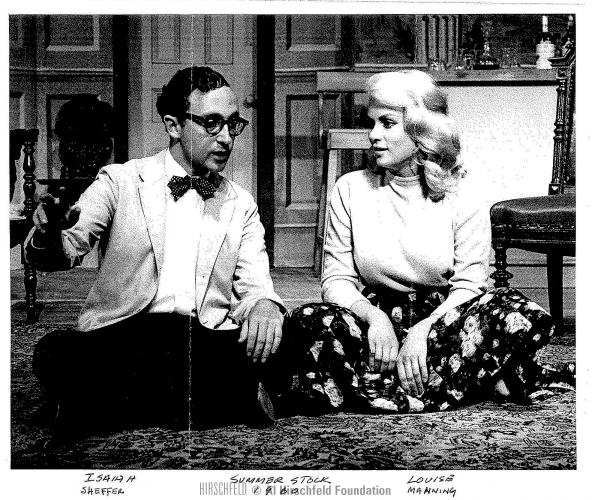 In mid-December, Symphony Space held a memorial service for the late, great Isaiah Sheffer. Among those who spoke was a colleague from Sheffer's salad days in New York, an actress by the name of Louise Manning, who later became Louise Kerz Hirschfeld, and now Cullman.

"I enrolled at the Theatre Studio of NY without much experience. My friend Ina Balin studied there with Lonny Chapman. The school was a spinoff of the Actor’s Studio. Isaiah ran the office...already honing his administrative talents. The job of collecting fees from potential actors, was not an easy task. He was very smart with a great sense of humor. There was an exceptional group of actors…Lou Antonio (a sort of young Brando type) Robert Duvall (with blond hair and high voltage eyes) Lee Meriweather (a former Miss America, searching for Stanislavski) Lore Noto (who later produced The Fantastics) and Dusty Hoffman (an intense character actor)…Isaiah managed to keep the bursting talent under one roof.

"But he was always doing OTHER theatrical assignments. He adapted Yiddish playwrights to English, it was the first time I heard the names Peretz and Sholom Aleichem. He also directed a radio program on WEVD…where he recruited theatre studio actors for the shows. Yes, I performed in an obscure Spanish play from the 1600s. Unknown to this day, Sailor’s Wife will always remind me of Isaiah’s boundless theatrical inquiry!!!

"Around 1959 Isaiah brought the legendary writer Eric Bentley to class. His theatrical criticism and analysis were mandatory for students…I sang 'Polly’s Song' from Three Penny Opera…and we were all mesmerized by Eric’s comments about Brecht and Weill.

"I was delighted to appear opposite Isaiah in Summer Stock. It was a comedy called Make a Million. It was a great summer in Fishkill, NY…I borrowed a car and during the day, I drove members of the Company around the small town. I remember also spending time with Ether Sheffer, Isaiah’s wife. She was teaching a college course in French Socialism Of the 18th Century, and I noted that husband and wife probably had very spirited and intellectual conversations at the breakfast table we all dispersed over the years, but my friendship and admiration for Isaiah never ceased. I remember a line from 'Polly’s Song'…'sweet while it lasted, but now it all over…'

"Farewell…Isaiah and thanks for the nourishment you gave me."

to watch the memorial service click here. (Louise's remarks begin at 29:37). Louise adds the following about the connection between Al Hirschfeld, Isaiah Sheffer and Symphony Space:

"Al Hirschfeld made his last public appearance at Symphony Space in January 2003, several  days before he died. Isaiah Sheffer arranged for a reading of selections from Show Business is No Business. The entire audience rose with sustained applause to salute Al after the  reading. It was a very emotional moment.

"Many Hirschfeld drawings were used for Symphony Space’s ”Wall to Wall Broadway”  in 2009, in collaboration of the Al Hirschfeld Foundation.

"Isaiah’s dream of a cultural center on the Upper West Side of New York was realized. His death in 2012 resulted in great sadness for family, his staff and associates and audiences."