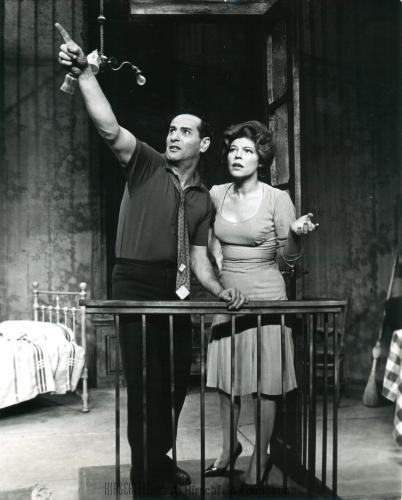 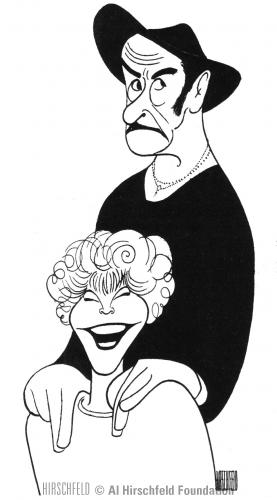 "twice around the park"

Anne Jackson and Eli Wallach were regular visitors to the Hirschfeld Dinners. They usually entertained afterwards by reciting a scene or a poem to everyone’s delight. They were loyal and loving to the great caricaturist who immortalized them in so many of their greatest theatrical hits.

Al and I would attend their holiday parties at their beautiful French country apartment on Riverside Drive. Elia Kazan always attended, so did Robert Lewis, the director and historian of The Group Theatre. There were always fascinating conversations about moments in 1930s play, performances from past, and of course, Stella Adler and Harold Clurman stories. Everyone was grateful to Anne and Eli for these historical get-togethers.

It was during the run of Rhinoceros in 1961 that I first got to see the extraordinary acting couple at work. I was assistant to the producer Leo Kerz, and I observed a special event, an anti-fascist play wrapped in an absurd comedy with some great actors, including Zero Mostel, Morris Carnovsky and Jean Stapleton. I used to stand in the rear of the theatre with a young man named Dustin Hoffman who ran the concession stand, and we would evaluate the performances.

This is the environment that Eli and Anne worked in and brought a brilliant mutual understanding of theatre to their professional and personal lives. I have written about Eli when he passed away in June 2014 but I wanted to write a few lines about Anne, the celebrated stage actress, advocate and teacher of The Method, who appeared in television, theatre and films. Born in Allegheny, PA, at 17 she studied with famed acting coach Sanford Meisner, and made her acting debut in 1945 in The Cherry Orchard. Other credits include Summer and Smoke, Arms and the Man, Luv, The Waltz of the Toreadors, and Lost in Yonkers. Anne is also associated with the Golden Age of Television in the 1950s, a time when actors, writers, and directors gave their considerable theatrical talent to the development of the new medium.

Married to Eli since 1948, the couple often appeared together, for instance, the Murray Schisgal play, The Tiger and the Typist for which Anne won an Obie Award. Their most important productions were, however, their gifted children: artist Peter, and actors Katherine, and Roberta. There was a public phone backstage at the Longacre (during the run of Rhinoceros), and I used to hear Anne say “Roberta did you do your homework?” I imagine the Wallachs kept tabs on the children from all the backstages along the Rialto.

Like a great wine, the acting of Anne and Eli mellowed with age, their vitality, humor, and wisdom added to the Grand Couple’s identity in the American Theatre. They will be missed but not forgotten.