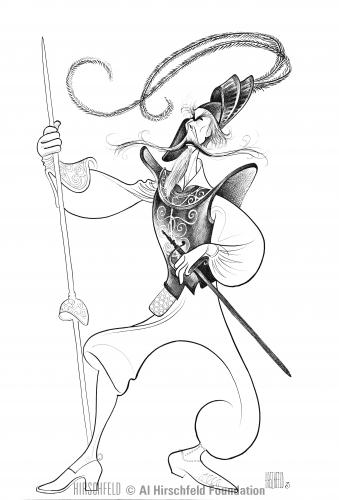 On May 22nd, visitors will have the once in a lifetime chance to walk through and observe the Hirschfeld Century more or less as it unfolded in a new exhibition at the New York Historical Society.  Three years in the making, this new show brings together some of Hirschfeld’s greatest works, as well as a number of pieces that audiences have not seen since they were first published. More than half of the show are drawings, paintings and prints that have never been exhibited before, and will prove to be a revelation for the hardiest of Hirschfeld admirers.

Of course, there will be many classic drawings: Guys and Dolls (1950), Fiddler on the Roof (1964), his last drawing for the New York Times, published just weeks before his death, of Tommy Tune (2002). In addition there will a selection of his classic color covers for TV Guide, film posters, sketchbooks, newspaper clippings and printed ephemera that help tell how Hirschfeld both recorded and defined so much of American popular culture during his remarkably active eighty-two year career.

There are early, pre-caricature works of David and Myron Selznick, who worked with Al at Selznick Pictures in the early part of the Twenties, and classic final works of The Philadelphia Orchestra, Hairspray, and The Sopranos. This will be the first time viewers can see the original drawing of the premiere production of Long Day’s Journey Into Night (1956) alongside a drawing of the same show from 1988. Jason Robards appears in both. In the first as the dissolute alcoholic son, and in the latter as the patriarch of the Tyrone clan.

Near the end of the show is a video viewing area where visitors can see the first short film on Hirschfeld that Susan Dryfoos made before she embarked on making the Oscar nominated The Line King documentary, as well as a clip from Disney’s Fantasia/2000 of “Rhapsody in Blue” in which are the characters in the piece are based on Hirschfeld drawings. The exhibition ends with images of Broadway today as seen by Hirschfeld.

Organized by Louise Kerz Hirschfeld and curated by David Leopold, the show was designed and created by the Historical Society. Don’t miss the only stop of this landmark exhibition. On view through October 12th. Click here for more information about the show and related events.