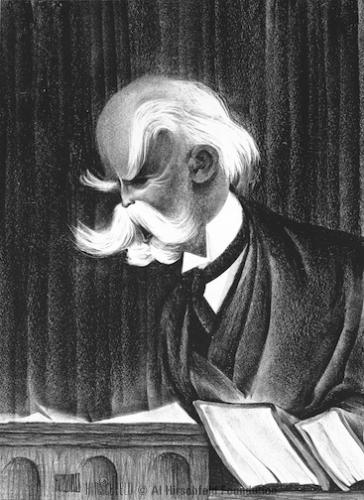 I’ve been cataloguing al Hirschfeld’s work for more than 20 years, the first 13 in the artist’s studio while he drew. I would often find things in cabinets, closets, etc., and many discoveries would be greeted with the same question by Hirschfeld, “Where in the world did you find that?”

After two decades of archival work, I feel confident that the only person who has seen more Hirschfeld artwork than myself was Al Hirschfeld. As our website shows, I catalogued nearly 10,000 works and besides some early unsigned film work, I feel like I have seen most of it.

So it was quite a surprise when Al Petras contacted us about a work in his collection, a lithograph on board of Supreme Court Justice Charles Evans Hughes that I had never seen or seen referenced before. Mr. Petras was kind enough to send us the work for examination and the print is unique in several ways in the history of Hirschfeld artwork. First, as an actual piece of art is it unusual in that appears to be a single print lithograph, in which no edition of other prints, limited or otherwise, was made. In addition the print is on thin board, where as Hirschfeld’s other known lithographs from this period are on paper. Nevertheless, the uniformity of the ink, the crispness of the box of the image (without any marks or indication of masking) clearly indicates a print rather than ink or crayon drawing.

The subject matter is also somewhat unusual. He did produce two hand-pulled, hand-signed limited-edition lithographs of the “Nine Old Men of the Supreme Court”, the first in 1933 and reproduced in November 1933 issue of Vanity Fair, and a different image in 1937. The sketchbook for the latter is in the collection of the Library of Congress.

Yet, Hirschfeld, for the most part, stayed away from political or legal subjects, concentrating primarily on the performing, visual and literary arts in drawings and prints that appeared over nine decades in virtually every significant publication of the 20th century, including a 75-year relationship with the New York Times. Nevertheless, he held his prints of the Supreme Court Justices in high regard, and saw that they were reproduced in several book collections of his work. The works have also been featured in exhibitions of his work from the time they were created. These works are highly valued by collectors and public institutions as well.

There is a pencil inscription, written by the artist, about the number of decress handed down without any of them being overturned. That also attests to his fondness for the work, although the identity of the intended recipient, "Josef," is a mystery. The accuracy of the inscription I will leave to others, but the fact that Hirschfeld wrote it indicates that he believed it to be true. It appears to be in excellent condition, all the more remarkable for a work that is three quarters of a century old.

The Hughes print has been added to the Collection of the Supreme Court of the United States, with funds provided by the Supreme Court Historical Society.  The Curator's Office manages a public collection of about 15,000 graphic arts objects (photographs, lithographs, etchings, engravings, drawings, posters, etc), as well as paintings, busts, decorative arts, building artifacts and Justices' memorabilia, all of which is of course Court-related.  The Curator's Office was created in 1973, and also prepares the exhibits in the building and manages the visitor services program.

We will let you know when the work goes on view at the Supreme Court.