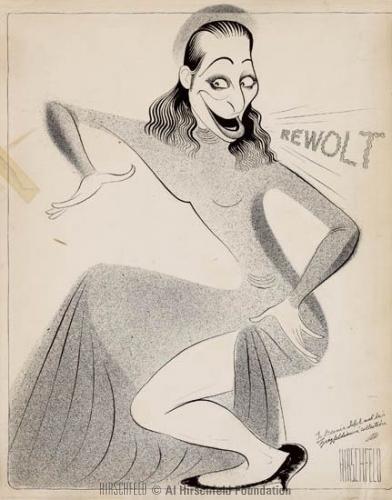 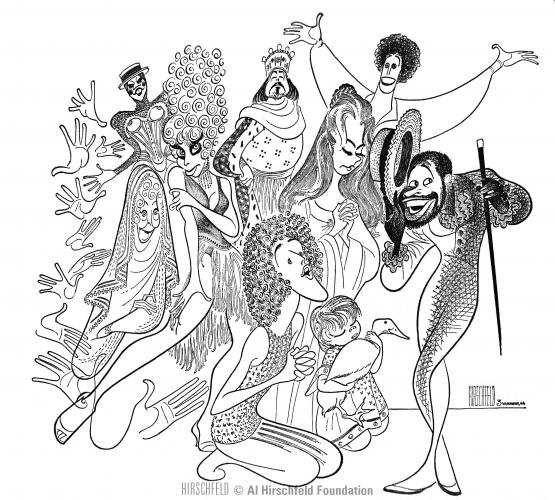 The Al Hirschfeld Foundation has just learned that never before available works by Al Hirschfeld are featured in a January 24 Swann Galleries auction.

"This collection of Hirschfeld artwork represented in this auction is a veritable 40 year slice of Al's career,” says Hirschfeld Foundation archivist David Leopold. “It covers the theater of course, but also television, film, dance, and literature. These drawings capture not only historic moments, but are as relevant as today's tweet, with his take on Pippin appearing in this sale just before the show's first revival on Broadway. His caricatures almost always were published right before a show's opening, so the tradition continues even ten years later."

"I was also dumbstruck to see the original 1936 portrait of Fanny Brice parodying Martha Graham in the Ziegfeld Follies," says Leopold. "Hirschfeld gave the work to Bernard Sobel, a classic Broadway press agent who kept a collection of what Al describes in his inscription as 'Ziegfeldiana.' There's also an important Katharine Hepburn piece and a snapshot of the "Upper West Side Intelligentsia" circa 1971 at Zabars. All but one of these drawings have been in private hands almost since the day they were drawn, acquired directly from Hirschfeld, so this is a once in a lifetime event. I wish we had them in the the Foundation's collection."

Other works include the cast portrait of the original production of 1776. "The producer of this 1969 Tony winner for Best Musical bought this work as soon as it was completed, according to Hirschfeld's account books,” says Leopold. “It went directly from Hirschfeld's studio (after being
returned from the Times) to the producer's home or office."

There's a trio of Barbara Harris's in the first production of The Apple Tree. "Hirschfeld liked this work so much,” says Leopold, “he included it in his book, World of Hirschfeld." Daniel Webster pleads his case before a judge and jury conjured up by the devil, played by Will Geer, in Scratch, an ambitious play written by Archibald MacLeish, based on Stephen Vincent Benet's "The Devil and Daniel Webster." Hirschfeld takes us to the rehearsal room for the musical, Here's Love, capturing director Norman Jewison before the producer fired him and took the job for himself. To round out the group is a portrait of master interviewer, David Frost, dressed improbably as a clown.

The auction will begin at 1:30 p.m. on Thursday, January 24. Public exhibition begins Friday, January 18 to noon on the 24th For further information John Larson at (212) 254-4710 extension 61, or via e-mail at jlarson@swanngalleries.com.