Spend a Night with Hirschfeld on TCM 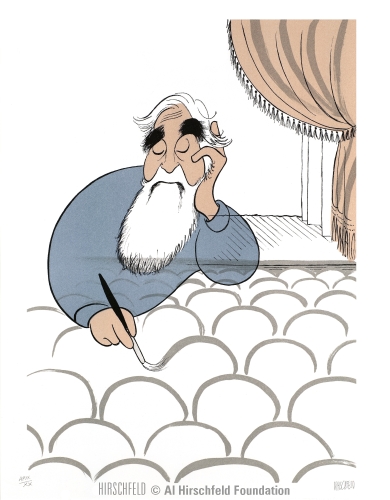 Although the holidays are now over, we still have a present for you: an evening of films "Drawn by Hirschfeld" on Turner Classic Movies hosted by Leonard Maltin and Dave Karger. This Wednesday, January 5th, starting at 8 pm (ET).

The lineup begins the year with a quartet of heavy hitters. First there is the 1996 Oscar nominated documentary, The Line King: The Al Hirschfeld Story, directed by Susan Dryfoos, which give viewers the chance to spend 90 minutes with Hirschfeld telling his own story, with help from Carol Channing, Katharine Hepburn, Lauren Bacall, and others.

Then at 9:45, The Marx Brother's A Night at the Opera (1935), which Hirschfeld drew six posters for, and numerous other images that helped cement the look of the Marx Brothers forever. It was around this time that Hirschfeld realized he was achieving success with his work because "the people started looking like my drawings, rather than the other way around."

At 11:30, Laurel and Hardy star in their iconic Sons of the Desert (1933). Hirschfeld had been drawing the comedic duo since they signed with MGM in 1927 and he produced dozens of posters and black and white drawings for their first eight feature films at the studio, and many of their shorts. He would continue drawing the pair for another 75 years, including an image for a US postage stamp.

Finally at 12:45, we have Charlie Chaplin's historic The Great Dictator(1940), a film that unfortunately never loses its relevancy...or its humor. Hirschfeld had been drawing Chaplin since 1926, and the two met in Bali in 1932, a decisive moment for both men. Chaplin was another subject that would never be far from Hirschfeld's pen, and he would draw a postage stamp of Chaplin as well.

This will be a great night at the movies, and the hosts will sure to have some interesting conversation about the films and Hirschfeld, so make some popcorn, get your favorite drink, and settle in for this Hirschfeld film festival.