TGIF: Leslie Uggams in "Anything Goes" 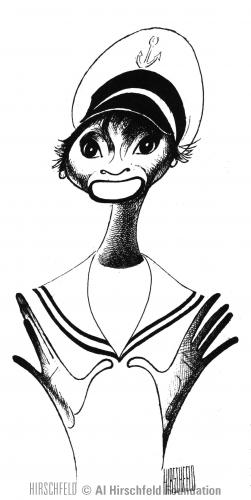 Leslie Uggams was not born a performer, she had to wait until she was six to be cast as Ethel Water's niece in the television series, Beulah. At nine she won the Apollo Theatre talent night so many times, they put her onthe bill, opened for such legends as Louis Armstrong, Ella Fitzgerald and Dinah Washington. At 15 she was signed by Mitch Miller to a recording contract and a regular spot on his television show.

Uggams was 24 when she made her Broadway debut in Hallelujah, Baby!, and won her first Tony. At 28, she starred in her first Hollywood film, Skyjacked. For many years hse was well knwon for her performance as Kizzy in the most watched dramatic show in TV history, the adaptation of Alex Haley's Roots.

She returned to Broadway for a two year run in Jerry's Girls and soon found herself leading the national touring company of Lincoln Center Theatre's revivial of Anything Goes, coming back to Broadway to take over for departing star, Patti Lupone.

"Tony Walton, our set designer, saw me and recommended me to Jerry Zaks, our director. He asked if I`d like to do the national tour, and naturally, I said yes. We had some problems on the tour, mostly with the set. It was really a wonderful set, but it just wasn`t made to move from town to town. It took three days to put it in, two days to take it out, so we were losing a lot of time. We probably should have had a backup set, but we didn`t.

"Anyway, when it was decided to close down, I thought I`d go on to other things, but then Patti LuPone decided to leave, so Jerry asked me to take over."

Uggams continues to delight audiences in concerts and in theater productions all over the country.