The Tony's As Seen By Hirschfeld 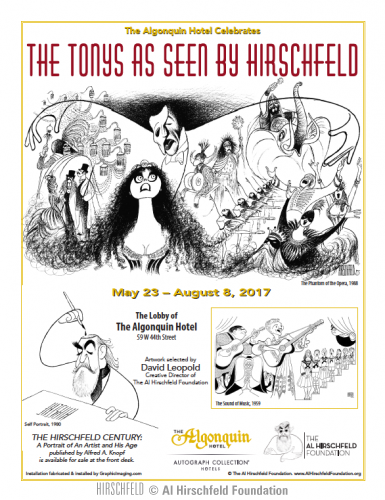 The Al Hirschfeld Foundation is honored to return to the Algonquin Hotel for another immersive installation of Hirschfeld artwork throughout the legendary hotel’s lobby. “The Tonys As Seen By Hirschfeld” celebrates the history of Broadway, with images of Tony-winning plays and musicals spanning the 20th century and beyond.

“The Algonquin Hotel Celebrates The Tonys As Seen By Hirschfeld” installation opened on May 23rd — in advance of the Tony Awards on June 11th — and will run through August 8, 2017. It features 25 three feet tall images of landmark productions from South Pacific in 1949 to a previously unpublished image of The Producers from 2001 hanging atop the iconic Lobby Lounge's oak paneling. This exhibit will mark the third year The Algonquin Hotel and the Al Hirschfeld Foundation have partnered on an exclusive exhibit.

The Algonquin has played a role in the Tony Awards since their inception. Brock Pemberton, a Roundtable member, was also a producing partner of Antoinette Perry. He pushed for the American Theatre Wing, which Perry helped to found, to honor distinguished achievements in the theatre in her honor after her death in 1946, and he nicknamed them the Tonys. Hirschfeld started to draw Broadway in 1926, and by 1947 when the first Tony was awarded, his artwork had become as much of a part of the Broadway experience as opening night itself. His drawings of the American Theater over 76 years, which included many Tony winners and nominees, earned him two lifetime achievement Tonys, and eventually a Broadway theater renamed in his honor in 2003.

Hirschfeld’s art in this installation cover more than a half century of his work, and shows how his lines were as incisive as any member of the famed  Roundtable. His celebrated group portrait of the Roundtable, so iconic it was featured in their Encyclopedia Britannica entry, and a copy of the group portrait hangs in the hotel’s Al Hirschfeld Suite.

There is no charge to see this delightful installation, so stop in if you are in the neighborhood, in town for a visit, or are looking for a place to meet with friends. With the combination of Hirschfeld and the Algonquin, you can’t miss.