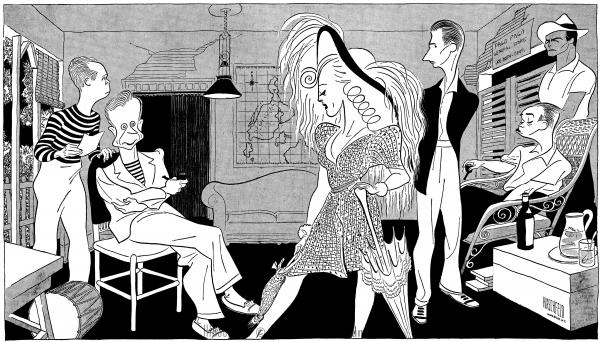 In 1941, Hirschfeld visited the three year old Woodstock Playhouse to create a memorable work. In the center is Sally Rand, famous for her nearly nude fan and bubble dances, rehearsing Somerset Maugham’s Rain, his South Seas drama about prostitute Sadie Thompson, and the missionary who tries to reform her. Her director is Playhouse founder Robert Elwyn, and her cast included many of the types of actors who made the Playhouse productions so memorable. There’s Ivan Triesulat, a German actor who made his Broadway debut in John Gielgud’s Hamlet in 1936 and would later go to Hollywood as a character actor who appeared in many films and on television; Don McHenry, a Broadway veteran who was a member of the original companies of Destry Rides Again andFanny,; Houston Richards, who was a regular in the original Cole Porter productions of Anything Goes, Red Hot and Blue, andLet’s Face It; and Duane McKinney who only made one Broadway appearance, but would later leave his mark as an art director for live theater on TV.

Hirschfeld’s drawing of the Playhouse rehearsal provides a backstage look of not only the production, but of Playhouse history. Now with a limited edition print authorized by the Al Hirschfeld Foundation, audiences can own their own piece of this history. In a strictly limited edition of only 100 impressions, each print is numbered, stamped with the authorized Al Hirschfeld Foundation seal, and is accompanied by a certificate of authenticity issued by the Foundation. A significant portion of each sale goes to support the Woodstock Playhouse.