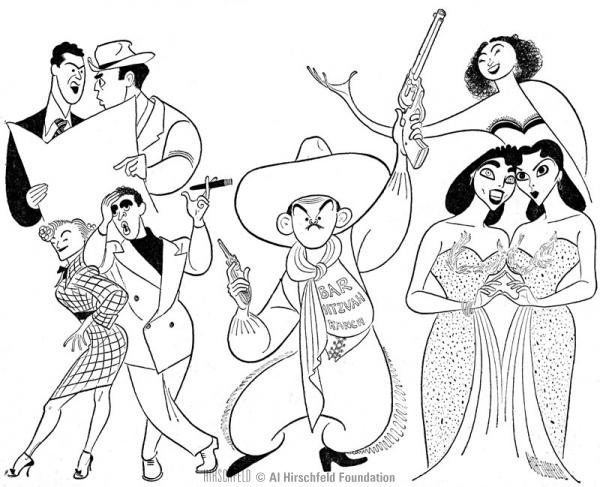 A new exhibition at the Museum of the City of New York, “New York’s Yiddish Theater: From the Bowery to Broadway,” opening March 9th explores the world of “Yiddish Broadway” found along Second Avenue on the Lower East Side of New York at the turn of the 20th Century. It documents how not only its stars like Danny Kaye, Stella Adler, Eddie Cantor, crossed over to the American stage, film and television, but how its plays, stage design, and music also filtered in the broader American culture leaving an indelible mark on the lives of generations of American.

Hirschfeld did not play an active role in the Yiddish Theater but he draw many of its stars including Maurice Schwartz, Fanny Brice, and Sophie Tucker. The Museum of the City of New York has asked to include five Hirschfeld works including portraits of Yiddish Theater performers who made the successful transition to Broadway and beyond, and cast drawings of production inspired by Yiddish theater or featuring one of its stars.

There will be prints of Zero Mostel in Fiddler on the Roof and Danny Kaye at the Palace, as well images of The Borscht Capades, Molly Picon in Milk and Honey, and Barbra Streisand in Funny Girl.

The exhibition will feature a wonderful collection of material on the Yiddish Theater, as well as objects from the original production of Fiddler on the Roof, Boris Aronson set designs, fellow 1930s theater portraitist Ben Solowey drawings, memorabilia from the Group Theatre, the Catskills, and much, much more.