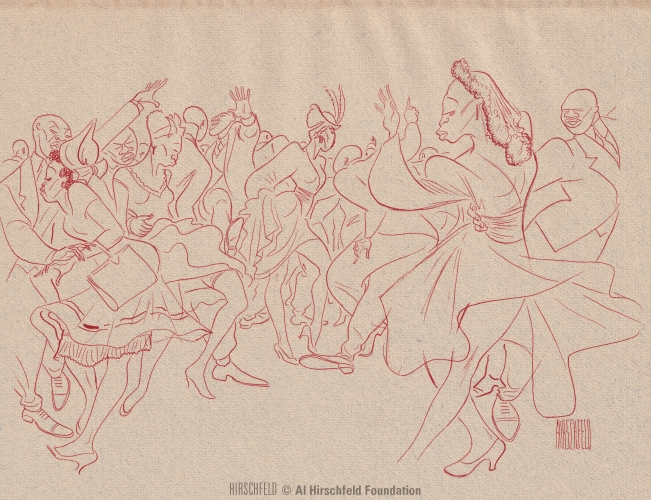 "stompin' at the savoy"

stompin at the savoy from HARLEM as seen by hirschfeld, 1941

Al Hirschfeld recognized beauty and artistic genius when he saw it. Walking the streets of Harlem, frequenting its establishments, seeing its sights and listening to its sounds, he discovered it’s inner beauty, life and vitality and depicted it in his signature artistic style. Photographs of the period confirm the authority and authenticity of his vision. His interpretations of Harlem’s reality record images that no photograph could quite capture. His art celebrated Harlem’s and Harlemites’ unique cultural and aesthetic style—the way Harlemites would stand, walk, dress, look and dance.

The world-famous Savoy Ballroom was the epicenter of Harlem’s dance world. The thousands of revelers who would gather nightly in the block-long dance hall invented many of the dances that would make Harlem and the Savoy famous. But the Savoy was more than a dance hall. It was one of the stages on which Harlemites sported their fashions and their attitudes as they danced to the big band sounds of Louis Armstrong, Chick Webb, Fletcher Henderson, and Duke Ellington, to mention just a few.

The music never stopped at the Savoy. Neither did the dancing. Hirschfeld’s Stompin’ at the Savoy reveals Harlem’s aesthetics, style and attitudes at their finest. 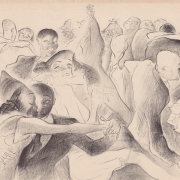 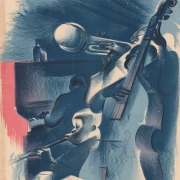 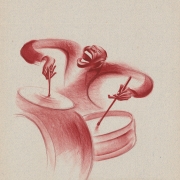 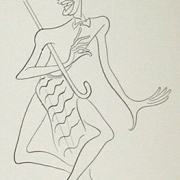 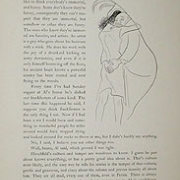