Finsihes his studies at the National Academy of Design.

Serves his vocational school apprenticeship as a errand boy at Goldwyn Pictures for $4 a week at the art department at 421 Fifth Avenue. In his free time, Hirschfeld draws academic style portraits of the studio stars for his own amusement. According to the artist, publicity director Howard Dietz found one of these portraits in a wastebasket one evening and decided it was good enough to run. Soon Hirschfeld was receiving regular assignments along with his other duties. 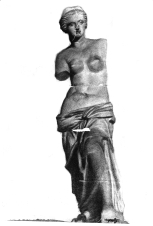 I lived and painted in Paris during most of the Twenties, occasionally returning to New York to “look around'' and add to my collection of contemporary money. On one of these infrequent sojourns back to my native land to get a fresh shirt, I found myself in the theatre one evening watching a performance of the celebrated French actor, Sacha Guitry, in his debut in the American theatre. During the performance I doodled a likeness of Mr. Guitry on tile back of the theatre program. My companion, seated next to me, seemed impressed with my scribble. He suggested that I translate this drawing onto a clean sheet of paper and he would personally take it to a friend of his who worked on the New York Herald Tribune.

Needless to say, I did the drawing on virgin drawing board and the following Sunday, larger than life, there it was on tile cover of the Herald Tribune's Sunday drama page. Encouraged by Arthur Folwell, George Goldsmith and Mark Goodrich, who comprised the editorial staff of the Herald Tribune drama department, I made a weekly contribution to the Sunday edition of that paper for the next twenty years.

One day, sometime in the mid-Twenties, I received tile following telegram:
WOULD LIKE A DRAWING OF HARRY LAUDER TWO COLS 4% INCHES DEEP DELIVERY NO LATER THAN TUESDAY SAM ZOLOTOW NEW YORK TIMES

I phoned Mr. Zolotow to make certain the assignment was on tile level and not an impractical joke invented by one of my screwball friends. Assured that the commission was a legitimate one I did the drawing of Sir Harry Lauder and delivered it to an elderly man seated behind the reception deck at the Times. The two-column drawing appeared the following Sunday on the Times drama page. For the ensuing two years I was assigned via Western Union to do either a three-, four- or five-column drawing of specific personalities, which I would dutifully deposit with the old man at the Times reception desk. I never met or spoke to anyone connected with the paper, during those years, except this anonymous gent.

One evening, at intermission, as I was standing in a theatre lobby chatting with the show's press agent, Dick Maney, a stranger ambled over and joined our conversation. Maney said in a matter of fact way, “You fellows know each over.'' We stared at each other, the stranger and 1, without recognition. In the embarrassed silence Dick Maney, whose eyebrows seemed to have left his forehead in surprise, introduced me to Sam Zolotow.

I tell this story of my advent into the Art of Caricature axed subsequent introduction to the complex publishing geld to illustrate to my reader that neither my life nor this [website] fits a rigid plan.