Everything is Coming Up... Orchids at New Broadway Exhibition 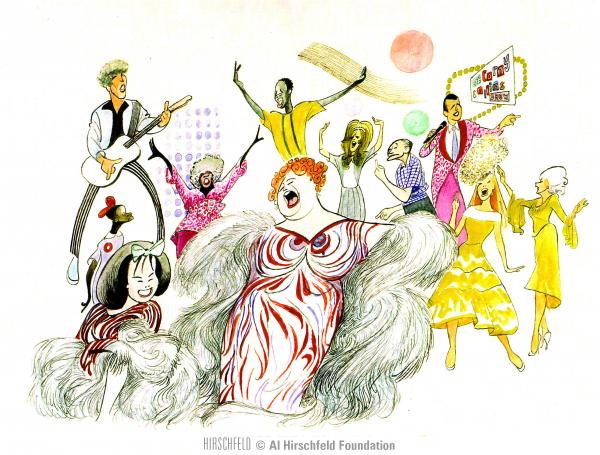 On March 5th a new Hirschfeld exhibiton on the history of Broadway will blossom at the New York Botanical Garden in conjunction with their world famous Orchid Show, whose theme this year is "on Broadway." While Tony award-winning set designer Scott Pask and image maker Drew Hodges bring the allure, excitement, and glamour of the Broadway to the Enid A. Haupt Conservatory, at the Garden's LuEsther T. Mertz Library visitors will see a stunning collection of drawings and prints in Hirschfeld's Broadway Scrapbook.

Hirschfeld’s Broadway Scrapbook tells the story of the Great White Way as seen by its foremost chronicler. Located in the LuEsther T. Mertz Library’s Rondina and LoFaro Gallery, Hirschfeld's Broadway Scrapbook features more than 30 rarely seen drawings and prints, as well as posters, programs, and sketchbooks from the Al Hirschfeld Foundation. Visitors will travel through time beginning in 1921 with Eugene O’Neill’s classic Anna Christie and ending with Hairspray in 2002. Stops along the way include My Fair Lady, Gypsy, Funny Girl, Fiddler on the Roof, La Cage Aux Folles, Evita, and Phantom of the Opera. Included are portraits of Broadway legends Stephen Sondheim, Arthur Miller, George and Ira Gershwin, Neil Simon, Jerome Robbins, Carol Channing, Patti Lupone, Barbra Streisand, and Julie Andrews. Also included in the exhibit is a selection of Broadway shows featuring a botanical connection such as House of Flowers, Desire Under the Elms, and Into the Woods. The show runs through April 25, 2011.