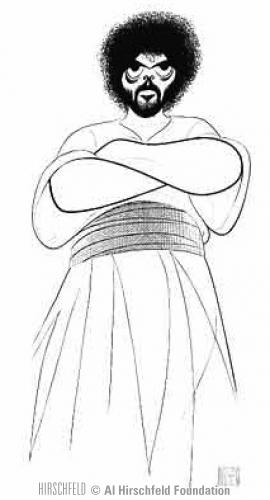 Raul Julia was a versatile actor and singer who was discovered performing in a nightclub in his native Puerto Rico by actor Orson Bean, who inspired the young performer to move to New York in 1964. Julia soon found work Off-Broadway in Shakespearean roles. He made his Broadway debut in 1968, but didn't make his mark until 1971 when he starred in the musical adaptation of Two Gentlemen of Verona. He gave landmark performances as MacHeath in Three Penny Opera, Where's Charley, the American premiere of Betrayal, and starred inthe original producton of Nine. This production of Othello was filmed by stage director and producer Joe Papp. Julia would reprise the role in 1991 with Christopher Walken playing his Iago.

Julia made his first film in 1968, and first attracted attention in the 1971 film, Panic in Needle Park. His breakout film role was in 1985's Kiss of the Spiderwoman playing alongside William Hurt. He starred in the popular Addams Family movies.